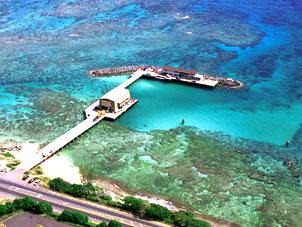 Makai Ocean Engineering was founded in 1973 as a diversified ocean engineering company focused on providing design engineering and development services to a broad range of clientele both foreign and domestic. Practice areas include engineering for ocean based renewable energy (OTEC and SWAC), large underwater pipelines, software for planning, simulation, installation and recovery of submarine cables and arrays, and software for visualizing scientific 4D/5D data. Makai Ocean Engineering takes pride in its extensive record of success in achieving innovative solutions to difficult problems for its partners and clients and continues to serve leading industrial and commercial firms as well as federal, state and local governments worldwide.

Makai has maintained the highest caliber of quality engineering services because of an uncompromising selection of talented engineers in various disciplines. The vast majority of Makai employees hold advanced degrees in engineering, and the physical and computer sciences.

Dr. Andres is Makai’s President and CEO. He is responsible for all aspects of Makai’s diverse portfolio of business and leads a team of technical program managers in all areas of Makai’s engineering research and design. After assuming leadership of the company from Dr. Van Ryzin in 2006, Dr. Andres led the rapid growth of the company and created the newest division of the company – the scientific visualization software division, to which he continues to contribute to as a technical lead.

Dr. Andres’ extensive technical expertise includes his service as the Senior Ocean Engineer and Division Head of Makai’s Cable Control Software divison. Over the last 25 years under Dr. Andres’ direction the cable control software grew from an R&D project into the #1 worldwide standard for telecom subsea cable lays, and has been used for the installation of over 200,000 km of subsea cable. The software has also been utilized in defense applications such as the installation of U.S. Navy and Australian Navy acoustic ranges and in towed arrays from surface and underwater platforms. The functionality and accuracy of Makai’s cable control software is unrivaled in the industry and we look forward to expanding its application to new markets.

Dr. Van Ryzin is founder and Vice President of Makai Ocean Engineering. He has been a Senior Ocean Engineer in every major program at Makai since founding the company in 1973, and serves as the Division Head for Makai’s ocean thermal energy conversion (OTEC) division. His work has included leading edge research in the areas of ocean renewable energy, especially seawater air conditioning (SWAC) and OTEC; deep water cable laying software; marine vehicle and buoy system design; and diving and undersea habitat system design.

Dr. Van Ryzin is an internationally respected expert on OTEC, and his experience with the technology dates back to the world’s first net-power producing OTEC plant – mini-OTEC – in 1979. Since that time, Dr. Van Ryzin has led unique R&D projects for a variety of government and commercial clients worldwide. This work includes designs for commercial 100MW and pilot OTEC plants, research and development of mooring systems, pipelines, heat exchangers, and comprehensive OTEC technical and economic modeling software.

Mr. Jensen is the technical leader of Makai’s SWAC division. Under Mr. Jensen’s direction, Makai has become the de facto world leader in SWAC system engineering and design, with more deep water SWAC pipeline designs installed and operating than any other firm. Most recently, Mr. Jensen led the design and installation management planning of a 1.6 meter (63″) deep ocean cold water intake pipeline and 1.4 meter (54″) discharge pipeline for the Honolulu Seawater Air Conditioning project. These pipelines are scheduled for installation in 2013.

Mr. Lipp has 30 years of experience related to the design, operation and testing of ocean related software and hardware systems. He served as project manager for the U.S. government funded development of a submarine cable planning software. The resulting software, MakaiPlan, has become the standard for submarine cable planning worldwide. Mr. Lipp also served as a program manager in Makai’s OTEC division, developing data acquisition and control software for an OTEC demonstration plant, software for the thermodynamic modeling and analysis of OTEC systems, and a technical OTEC software model to estimate site specific funding requirements of OTEC plant construction and operating expenses which was used in U.S. military feasibility studies comparing the economic benefits of OTEC plants constructed at different locations.

Before joining Makai, Mr. Lipp worked as a senior design engineer and was the principal investigator for the Naval Ocean Systems Center in Hawaii in charge of a multi-million dollar, multi-year contract developing and testing submersible vehicles, including the Advanced Tethered Vehicle (ATV). He was the technical lead in the design of the ATV overboarding A-Frame and ram tensioner system, coordinated and supervised the fabrication, assembly, integration, and testing of subsystem components as well as assisted in the development of a set of underwater hydraulic tools for use by the ATV.